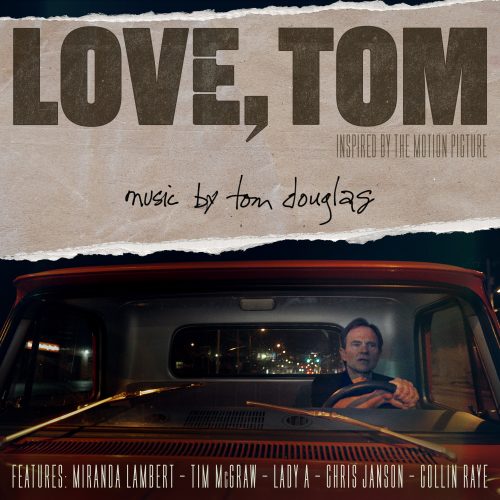 PICTURE” OUT NOW VIA MONUMENT RECORDS

Listen to Love, Tom – Inspired by the Motion Picture HERE

Over the course of a single night in Nashville, GRAMMY, Academy Award, and Golden Globe nominated songwriter Tom Douglas narrates a letter of hope to a desperate world in LOVE, TOM.

A few years ago, Tom Douglas received a letter from a struggling songwriter, asking him what he did when he wanted to give up. When Douglas sat down to write him back, LOVE, TOMwas born. Unflinchingly honest and personal, Douglas peels back the curtain of the creative process, revealing his own past hardships and the struggle of the creative endeavor, while singing his own versions of the beloved songs he wrote, at some of Nashville’s most historic and notable locations. Through music and film, LOVE, TOM ultimately reminds us that you can never give up on something that you love.

In conjunction with LOVE, TOM, Douglas releases a companion album, Love, Tom – Inspired by the Motion Picture on Monument Records today. The 10-song project features many of Tom’s beloved co-writers and friends, including Miranda Lambert, Tim McGraw, Lady A, Chris Janson, and Collin Raye. Each track on the album is performed by Douglas in the film as he takes you back to the day he wrote it.

About Tom Douglas:
Tom Douglas is an Academy Award, Golden Globe and GRAMMY-nominated songwriter. After enjoying a 13-year career in commercial real estate, Douglas got his first song recorded by Collin Raye at the age of 41. That song, “Little Rock”, reached #1, earned a nomination for CMA Song of the Year and achieved the Million-Air award from BMI for receiving one million spins on country radio. Since then, Douglas has written numerous number one hits, including: “I Run to You” (Lady A), “Southern Voice” (Tim McGraw) and “The House That Built Me” (Miranda Lambert). The Grammy Award-winning song “The House That Built Me” remained at number one on the Billboard charts for four weeks and earned ACM’s first ever Song of the Decade award.

Douglas has written countless well-received songs for a wide range of artists, including: Keith Urban, P!nk, Luke Bryan, Celine Dion, Tim McGraw, Carrie Underwood, Florida Georgia Line, Kenny Chesney, Kane Brown, George Strait, Chris Janson, and Collin Raye among others. In 2011 Douglas’ song, “Coming Home” received an Oscar and Golden Globe nomination for Best Original Song. In 2014, Douglas was inducted into the Nashville Songwriters Hall of Fame, subsequently receiving a Grammy Nomination for his song “Meanwhile Back at Mama’s” recorded by Tim McGraw. Some of Douglas’ recent work includes “Drunk Girl” recorded by Chris Janson, which received the 2018 MusicRow Award for Song of The Year. He also penned the song “Dear Hate” recorded by Maren Morris and Vince Gill, earning the Grammy nomination for the 2019 Country Song of the Year. Douglas is currently signed to Sony Music Publishing, and lives in Nashville with his wife, Katie.

About Monument Records:
Formed under the leadership of Jason Owen and Shane McAnally, Monument Records is a joint venture with Sony Music Entertainment. The label’s roster includes Caitlyn Smith, Walker Hayes, Brandon Ratcliff, Teddy Robb, Alex Hall and Tigirlily as well as the albums for the film Love, Tom and the FOX television show Monarch.

Since Monument’s launch, the artist roster has accumulated over a billion streams, released multi-Platinum singles – including Walker Hayes’ number one, smash hit “Fancy Like” – made major TV appearances on the Tonight Show Starring Jimmy Fallon, the TODAY Show, Late Night with Seth Meyers, and Good Morning America, and been written about in the pages of Billboard, Rolling Stone, Time Magazine and the New York Times. The label has created major partnerships for their artists with Applebee’s, Boot Barn, OtterBox, The VFW, and Free People, among many other highlights.