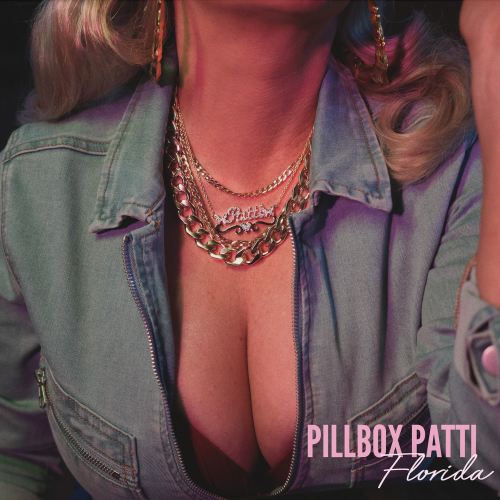 Each track a reflection of first-hand personal experiences growing up in Florida: often alone, poor and looking for more to do than just eat, pray or do drugs in her small town.

Now, Pillbox Patti releases a full project of songs, her debut on Monument Records, that represents who she is to the core. A project that speaks not to the idyllic country up-bringing often displayed in the genre, but to the true experiences of so many Americans, living day to day and trying to get by with the help of their friends, their dreams and maybe a few illicit substances. “It’s not Mayberry,” says Pillbox Patti, “but it’s real.”

Florida is out now – Listen HERE

An award-winning and celebrated songwriter on Music Row, Nicolette Hayford, otherwise known as Pillbox Patti, has been in Nashville for over a decade, writing other people’s stories and penning hits like “One Night Standards” and “Little Dive Bar in Dahlonega” for Ashley McBryde. Hayford has landed additional song credits on tracks for artists including Lainey Wilson, William Michael Morgan and Chrissy Metz. In 2021 she was named MusicRow’s Breakthrough Songwriter of the Year and was nominated for both ACM and CMA Song Of The Year for the aforementioned “One Night Standards.”

The success put more money in Hayford’s pocket than she had ever seen, after a childhood in and out of poverty and years of the grind in music city, but the pressure to share a version of country she didn’t feel was her own took a toll on the songstress. “I felt like I was disappearing,” says Hayford. “I was sort of getting type casted as a songwriter and only getting to show one side of who I am, musically. I realized that I needed to tell my own truths, or I was going to lose myself in this town.”

So, telling her truth is what she set out to do. Creating the moniker Pillbox Patti to draw a clear distinction between Nicolette Hayford the songwriter and Pillbox Patti the artist, she gathered her best friends – Connie Harrington, Benjy Davis, Aaron Ratiere, Park Chisolm and Ashley McBryde – a bunch of tequila, a few of the aforementioned illicit substances and the money she made from her songwriting cuts, and headed out to Harrington’s Lake House to write her own record. “I wasn’t on anybody’s dime but my own,” says Hayford. “So no one was telling me how, or where, or what kinds of songs I could cut or get away with. It was about me and for me with no other agenda. I had never given myself that freedom or permission before.”

That freedom allowed Hayford to write a record that is part fun, part joy, part pain, part loss and 100% honest. One that speaks to the people who don’t often get spoken to and are often forgotten in country music. “I hope it makes people want to celebrate the bullshit they’ve been through,” shares Hayford.

Standout track “Valentine’s Day” is about an abortion Hayford had in high school. “Suwannee” revels the life she came from in Florida. “Hookin Up” holds nothing back about the female experience and the double standards that are often attached and “Good People” argues that even if you have a few bad habits, it doesn’t make you bad.

All in all, Hayford says “I hope Florida sheds a light on the badass, cool ass, good ass people on the other side of these small towns. The kind of people I know and came up with that aren’t livin’ in a paint by number country song.”

More About Pillbox Patti in Her Own Words: