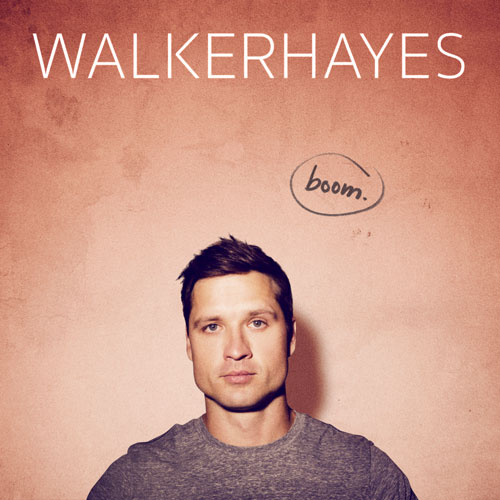 Monument Records’ Walker Hayes releases boom., his long-awaited, full-length studio album, nationwide Friday, Dec. 8. Hayes, who wrote or co-wrote every song on the 10-track album, many with ambiguous song titles, chose an album title that may well be his only instance where the title might give away the meaning.

“’boom!’ It’s my favorite word. It’s what I text my team every time another station adds ‘You Broke Up With Me’… It’s the first thing I say after I play a song from the album for anyone. So, it’s what we had to call the album. I’m just so excited to share another part of the story. BOOM!”

boom. is produced by GRAMMY-Award winning producer Shane McAnally – and is now available for pre-order. “You Broke Up With Me,” the project’s debut single, has already accrued over 25 million streams. At mainstream country radio, it’s just hit the Top 30 and is climbing.

In anticipation of his new album, Hayes is releasing “Beautiful,” the first of four instant grat tracks, directly to the fans who can’t get enough of what People calls his “irresistibly quirky” songwriting. Written entirely by Hayes, “Beautiful” lands on SiriusXM’s “The Highway” today. Just a preview of what to expect from boom. this December. “Beautiful” is available here.

One of Rolling Stone’s 2017 “Country Artists to Watch,” Hayes gained national attention last year with 8Tracks Vol. 1 and Vol. 2. Sixteen self-written and recorded songs, released through SMACKSongs and Rarespark Media Group, catapulted the singer/songwriter from working night shifts at Costco to the top of the music charts — and onto tours with Dan + Shay and Bobby Bones’ Funny and Alone Comedy Tour. That momentum has earned him a highly coveted opening spot on Thomas Rhett’s Home Team Tour, starting Sept. 22 at Los Angeles’ Greek Theater.

Entertainment Weekly noted Hayes’ unique hybrid’s “genre blending” and NPR’s World Café raved Hayes is “writing these really autobiographical songs and delivering them in this way that feels very intimate, very close range.” Rolling Stone concurred, “…he writes songs that are damn near impossible to classify, and that’s what makes them so interesting.”